The glamour, the glitz, the luxury—Hollywood Regency is the kind of decor that delivers the drama. And no wonder. It originated in Hollywood film sets of the late 1920s to the 1950s, a time when stars like Joan Crawford and designers like Dorothy Draper were in their heydays. “It was developed as a way to depict maximalist opulence that would translate well on screen,” says Cheryl Eisen, founder and president of luxury real estate design and marketing firm Interior Marketing Group in New York.

The lavish design style became a favorite among set decorators “because of its over-the-top lines, use of dramatic patterns, and high-contrast color, all of which translated to sumptuous sets in black-and-white films of the era,” says Kimberly Colletti of KC Design in Los Angeles. Not only was Hollywood Regency decor designed to pop on film, but it was also a form of escapism. “The style was a reaction to the austerity of the Depression and a desire to make life more glamorous,” says Martin Brudnizki of Martin Brudnizki Design Studio in London and New York. “It was a time when everyone was looking for fantasy, and the movies provided them with this escape.”

A room designed by Kimberly Colletti uses high-contrast color to pull off the look.

Colletti cites William Haines, a Hollywood actor-turned-designer known for creating opulent homes for clients like Joan Crawford and Betsy Bloomingdale in the 1930s and 1940s, as the father of Hollywood Regency design. “Later, in the early 2000s, the style had a revival, largely spawned by designers of the then-burgeoning boutique-hotel industry. Today it’s still a captivating style that appeals to anyone looking for a sense of glamour that complements many architectural styles,” she says.

This lounge by Lori Morris feels extra glam with its plush materials and crystal chandelier.

Eisen defines the style as a mix of glam eclecticism with a bold, modern flair: “It’s meant to emphasize the lifestyle of a stylish and extravagant person who is typically social, well-traveled, and loves to entertain.”

Gold, glass, lacquer, high-contrast design elements, velvets, brass, and deep tones mixed with reflective elements and finishes: Hollywood Regency decor isn’t the kind of look that will take a supporting role in your home. Rather, it is the star. Pulling it off is a matter of pulling out all the stops in a tasteful, glamorous way.

Blacks, whites, and metallics are the most common tones in Hollywood Regency decor, Colletti says. “Because the style was born in the black-and-white era of movie magic, it’s still strongly associated with the look,” she says.

“This era is all about attention-grabbing textures and myriad hues from subtle to strong,” says Marina Hanisch of Marina Hanisch Interiors based in Manhattan. Go for bold patterns, including Greek key, animal prints, and furs; a mix of elements from ornate Art Deco pieces to contemporary pieces; opulent, rich palettes; and soft textures. “Think more is more—pieces that draw attention and feel sexy,” Hanisch says.

Lacquered, high-sheen finishes like metals, enamels, and gilding are also key to the look, Colletti says, as are exaggerated lines (a tall and narrow front door painted high-gloss black with shiny brass hardware, for example), and high-contrast colors. Furniture is typically low to the ground, “all the better to make actors look taller,” Colletti says.

Typical pieces include tufted, low-slung seating, chairs with dramatic, often-splayed legs, gilded bar carts, and delicate side tables with metallic legs and accents, Colletti says. The floor offers another place to showcase art and design, Morris says. Area rugs add a layer of texture and interest. She suggests using an interesting gradient pattern that fades from one shade to the next, a modern damask motif in soft creams, or a bold animal print. Eisen recommends large geometric patterns or deep, jewel-toned colors to create Regency style underfoot.

Mirror, Mirror on the Wall—or Furniture

Mirrors and reflective surfaces lend well to this style—whether as an accent piece or a statement wall. “Think smoked glass walls with brass strapping and rosettes. Or if that’s too much for you, hang a gorgeous antique-glass mirror above a newly lacquered modern credenza, incorporating the old with the new,” Morris says.

Make sure statement lighting also takes stage. “Be bold and creative; it should sparkle and shine and be the crown jewel of the room,” Morris says. And don’t be afraid to mix metals such as antique brass, bright brass, and silver, she adds.

“A stunning light fixture, a to-die-for lacquer cabinet with metal detail, a voluptuous chair, exquisite wallpaper—all demanding the viewer’s attention at the same time. The key is the mixology of many statement pieces,” Morris says. Eisen advises balancing pattern, color, and metallic accents with neutral pieces and organic accessories so you won’t get tired of the look.

To create synergy, “it’s about how the textiles play off of each other, simultaneously working with and against each other to evoke a feeling of pure luxury—plush velvets against rougher woven textures, shiny silks and satins mixed with soft furs,” Morris says. And don’t forget walls: upholstered panels, textured wallpaper, or a diamond-tufted focal wall, she says. Yet the style isn’t limited just to your home’s interior, Colletti says: “Cabanas, outdoor dining rooms, and lounge areas are all great places to use a high-contrast palette with a limited number of colors, as well as dramatically shaped furniture.” According to her, “It instantly says, ‘This is a place for having fun and feeling glamorous.’ ” 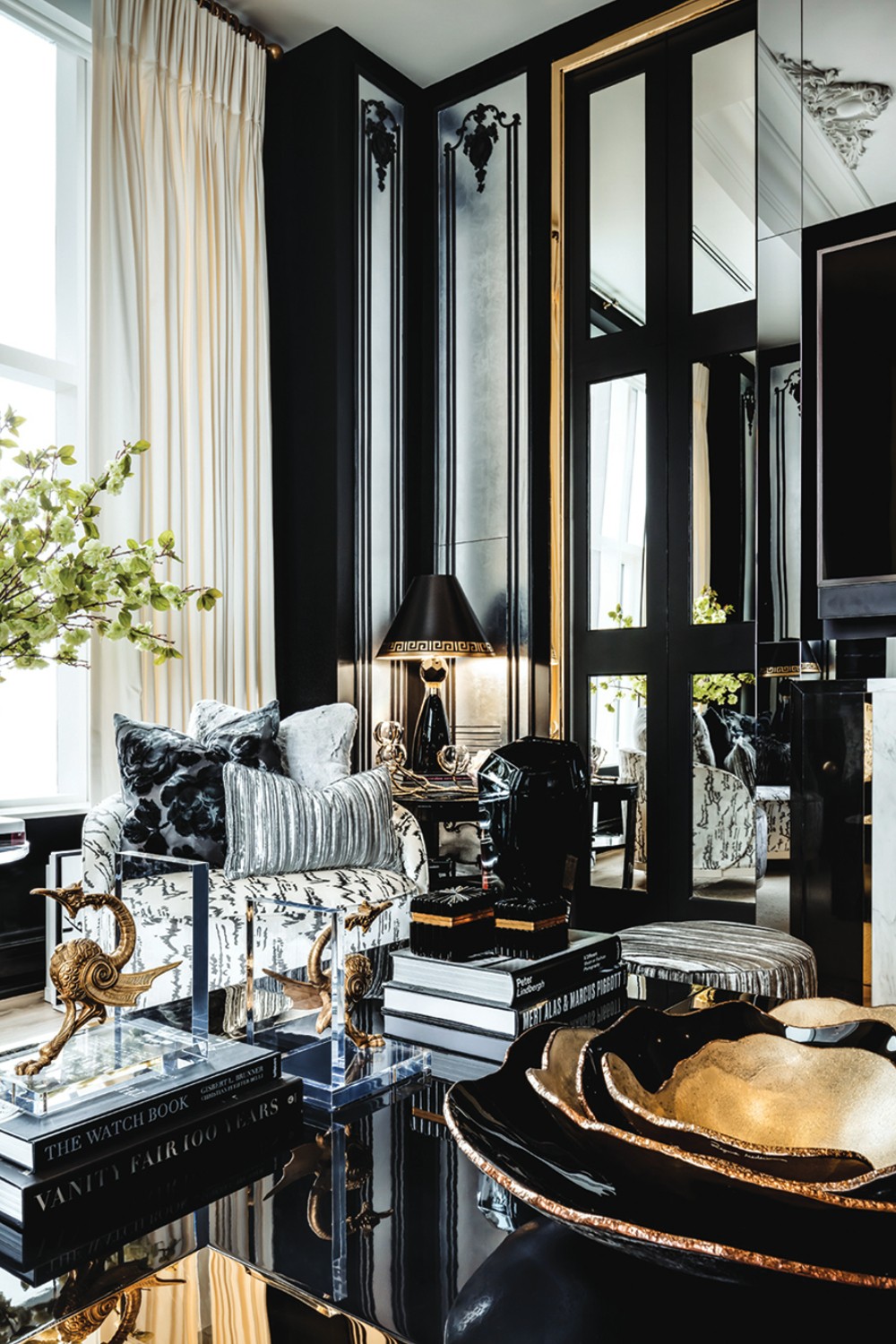 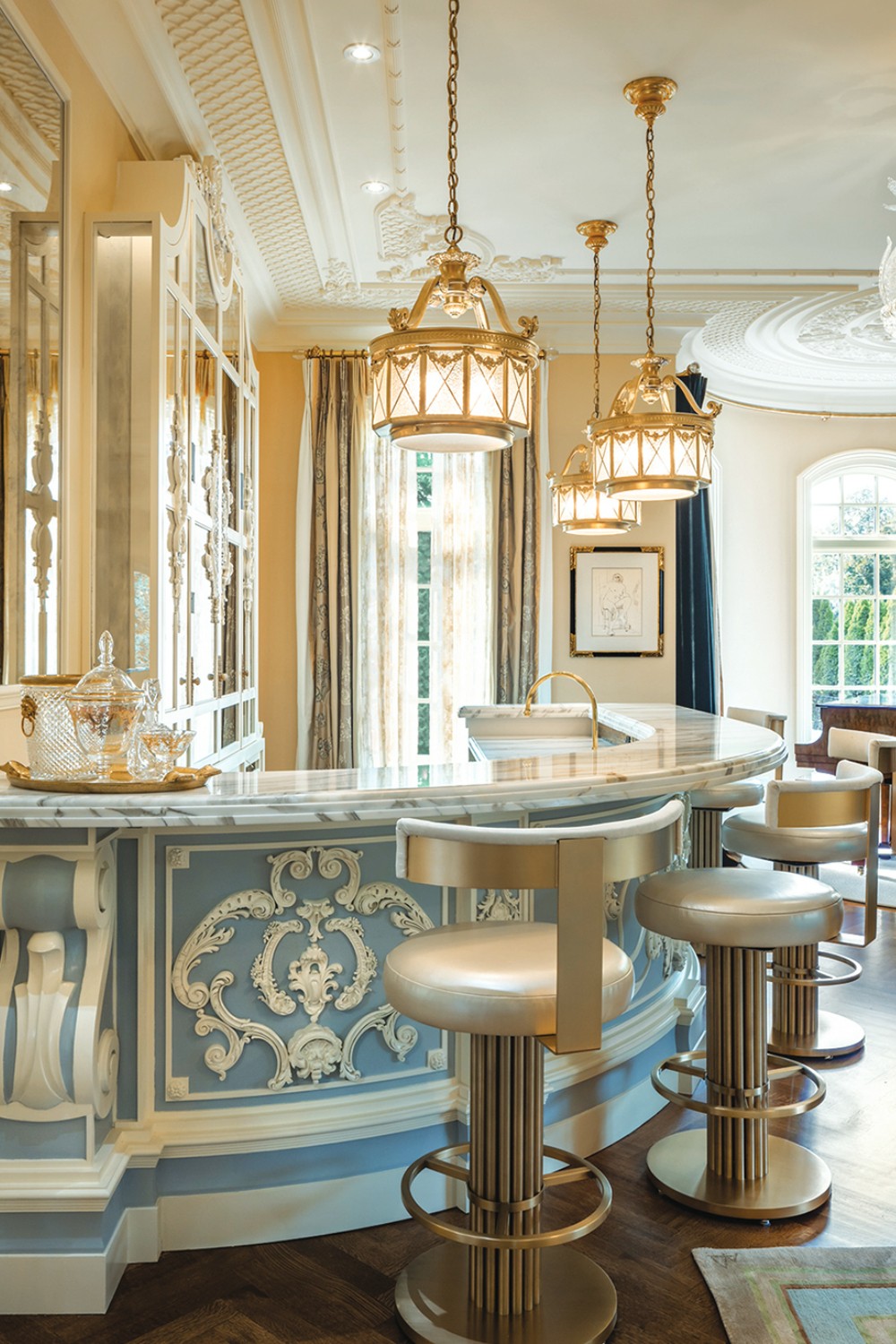